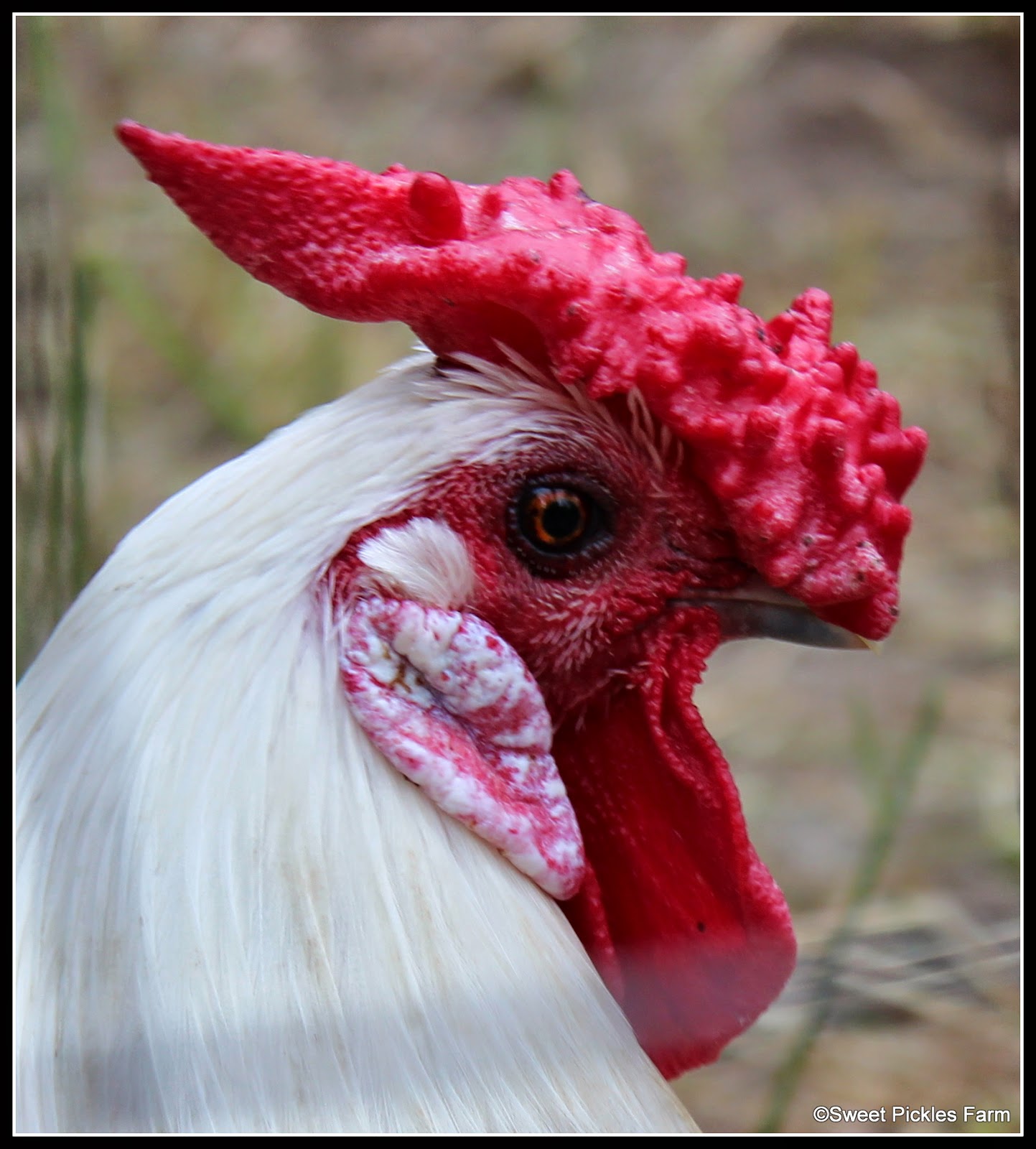 An Ode to Pudge

We thought we were in trouble,   (What were we thinking?)
We ordered a male! The pictures were so dashing
But just look at that tail-(and we were drinking!)
Well, since we got a little woman, (you just could not deny her)
She must have a little man (she just needed one beside her)
So, and then…
Thus began the saga of
The Rooster and his Hen…
We asked for the dashing rooster
To take care of his fair dame,
And soon enough the post office
Rang us that they came.
Along with a flock of biddies
Of differentiating  clans:
Barred Rocks, ameraucanas; a mixed bunch in our plans…
We named the little rooster, Pudge
And his little woman, Pidge
Because they were of small stature; white and black (just a tidge)
They all grew up together, and all the girls soon knew
That little mister rooster Pudge was the one to look up to.
He took his position kindly; a gentlemen at his best
He proudly let them know when it was time to go to rest.
He bravely gave a warning trill, when a hawk was overhead
All the girls stood still and looked
Waiting to be led,
And when he found a delicious tidbit on the ground,
He let himself go hungry as he gave his girls what he had found.
He was so very handsome, he loved his humans too
But  sadly they were away one day
When he knew what he had to do.
The wild cat came-a-calling
And stole away his hen
He stormed up to his enemy
And there he met his end.
His humans came too late to know
All they saw were the feathers
The tears that fell that day could match the
Flooding stormy weathers.
And so, Fair Pudge, you were small, but oh! so mighty
We will never, we are sure to say
Find another so uprighty.
We know that you will rest in peace
Along with your dear Pidge
And if we could have given you lodge we would have called it
Rooster Ridge. 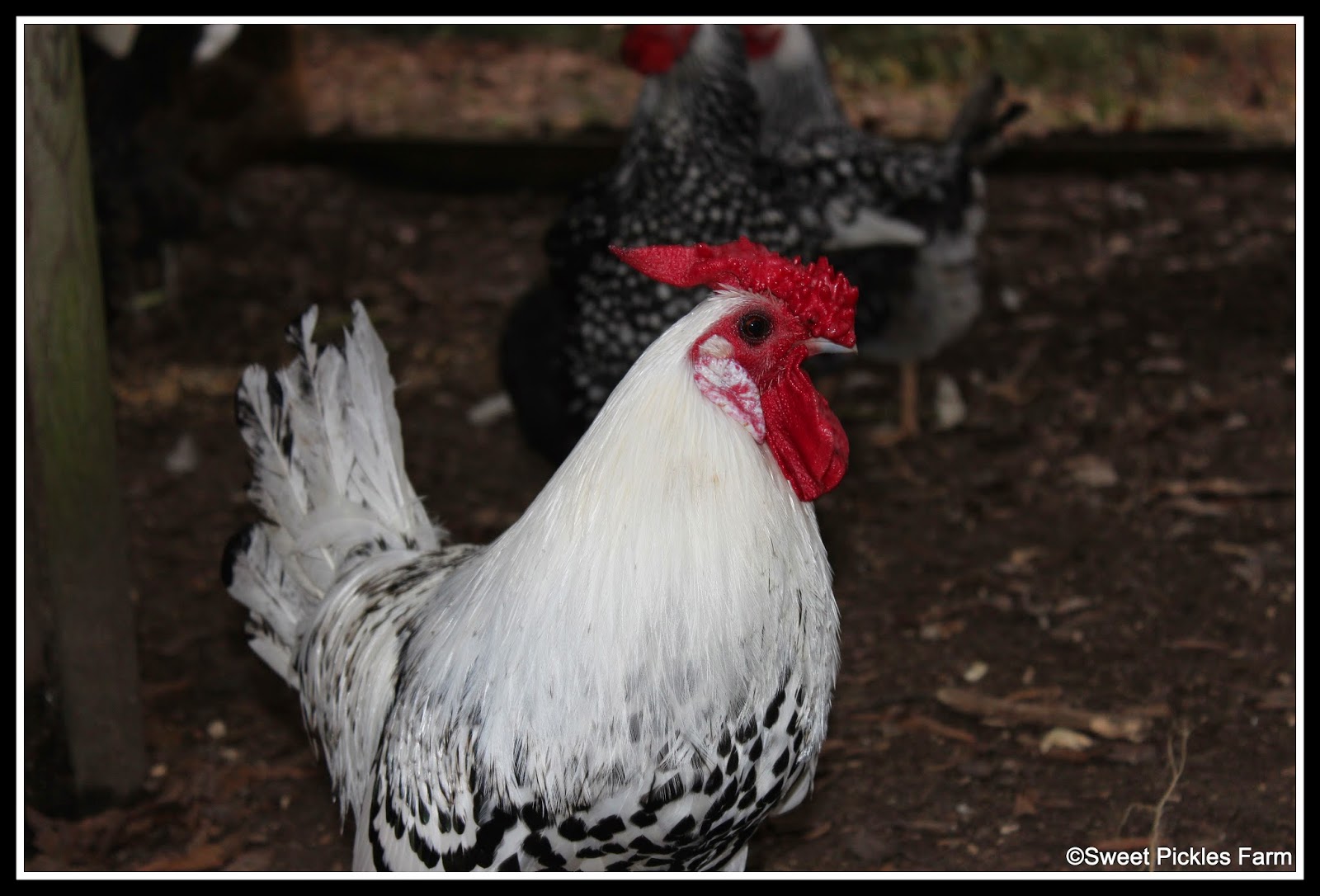 We are sure there are some people who will never understand how one can "fall in love" with an animal, much less of the poultry variety.... however, there is something to be said about respect for the critters that are in our world-whether we invite them, or they choose to live near us of their own accord.

Pudge came to us via mail-order; he was described as a smaller chicken with beautiful spots on pristine white feathers...we decided to order a male and a female of this breed.  We knew from our research that they were a bit flighty; in Mamie's mind, that was like "a long-tailed cat in a room full of rocking chairs", but, since we feel that way quite a bit ourselves, we thought it would be nice to have a good-looking couple of chickens in our brood of average Joanns.  (Of course, we love them all.) 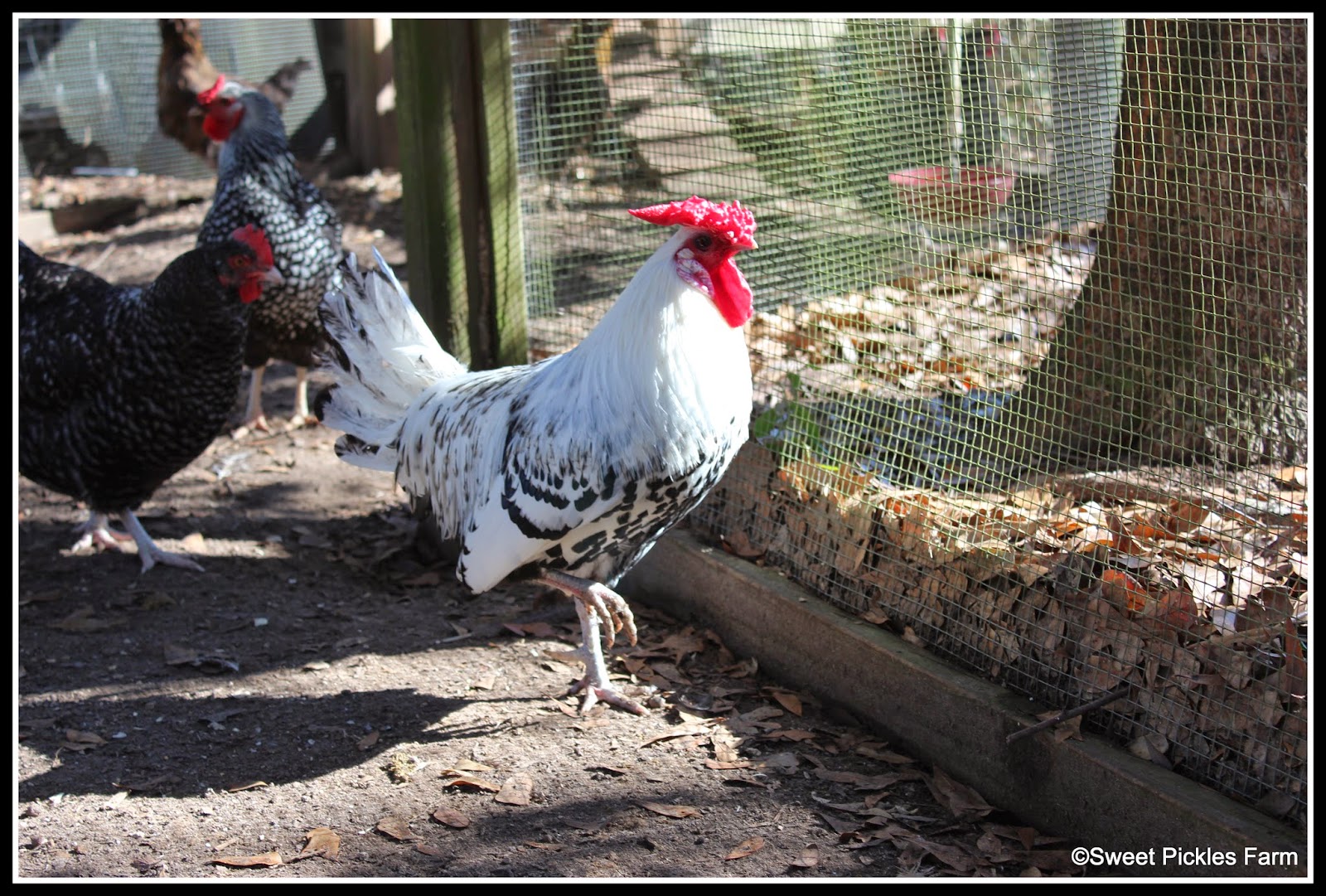 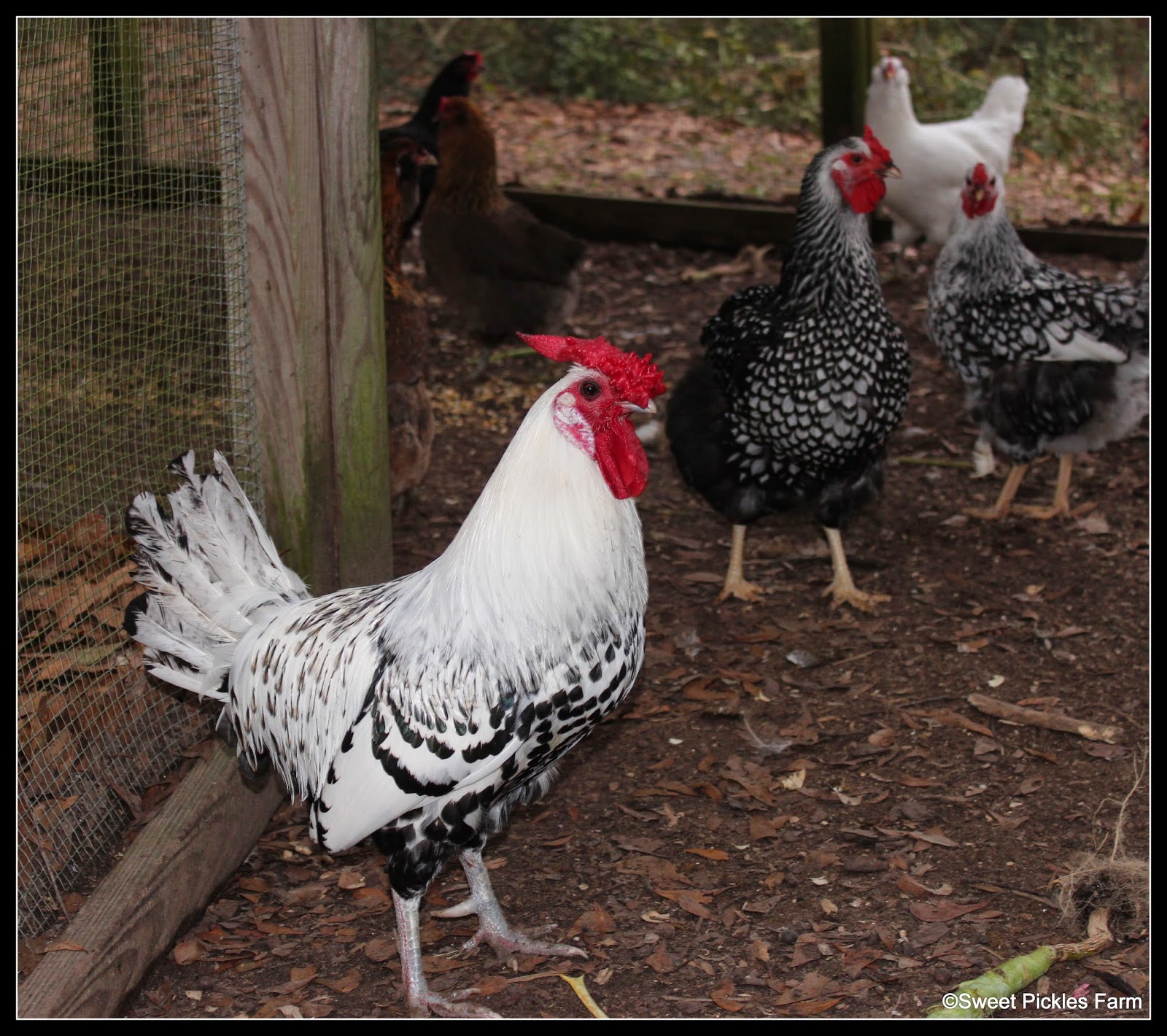 Sure enough, this little white-with-black-spots duo were the self-appointed victims that ran around the coop like we were going to send them to the guillotine; all we really wanted to do was to refill their water and food receptacles.  Pidge, the female of said duo, was especially skittish and edgy...we could never get her to come close to us. If we went into the coop to see if there were any eggs available, and she happened to be sitting in one of the boxes, she would look at us, pupils enlarging ever wider as we stepped closer. Despite our coo-ing and chicken-seducing words, if we got too near, she would let out a shreik and leap out of the box, even if her egg was half-way out, and moan and harp to all creation about her close to death encounter for a long time afterward.

Well, Pidge was the one who would always fly over the safety net we installed across the garden so that the chickens could go through their tunnel into the garden area and scratch, eat bugs, and dust-bathe to their hearts content in relative safety. Ironically, being so scaredy, it was she who would always fly over the fence and go exploring alone.  This finally caught up to her when one day, Mamie and Poppy came home to find she was gone.  Only a few beautiful, spangled feathers were left to show that she ever existed.  But, we would not have to run ourselves rugged trying to catch her or run her into the coop, where the rest of the flock were obediently and wisely settling in for the night.

However, Pudge was not so edgy as his mistress.  He was beautiful; his feathers were pure white, and the black spots shone on the bright white background so well that you were mesmerized by his looks.  We were so proud to have such a handsome rooster, but we wondered how well he would be able to hold his manly position over a bunch of girls much larger than he.  In time, he proved his manly, but gentlemanly nature; he warned his girls of impending dangers, he alerted them to tasty tid-bits he found (and could have devoured himself, leaving the girls none-the-wiser), and he shooed them into the coop at the right time of evening, when the girls would have otherwise languished outside until it was quite dangerous. 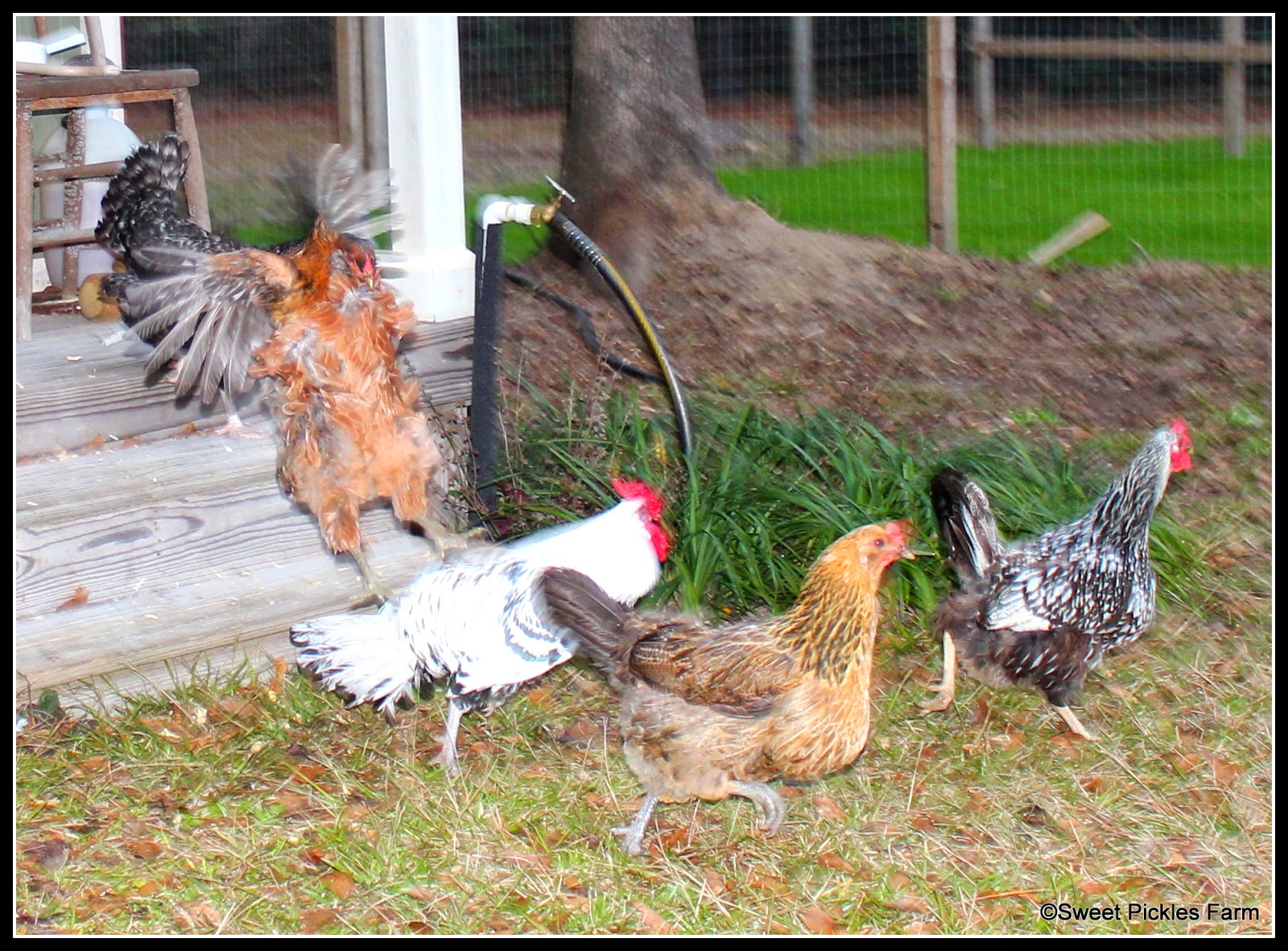 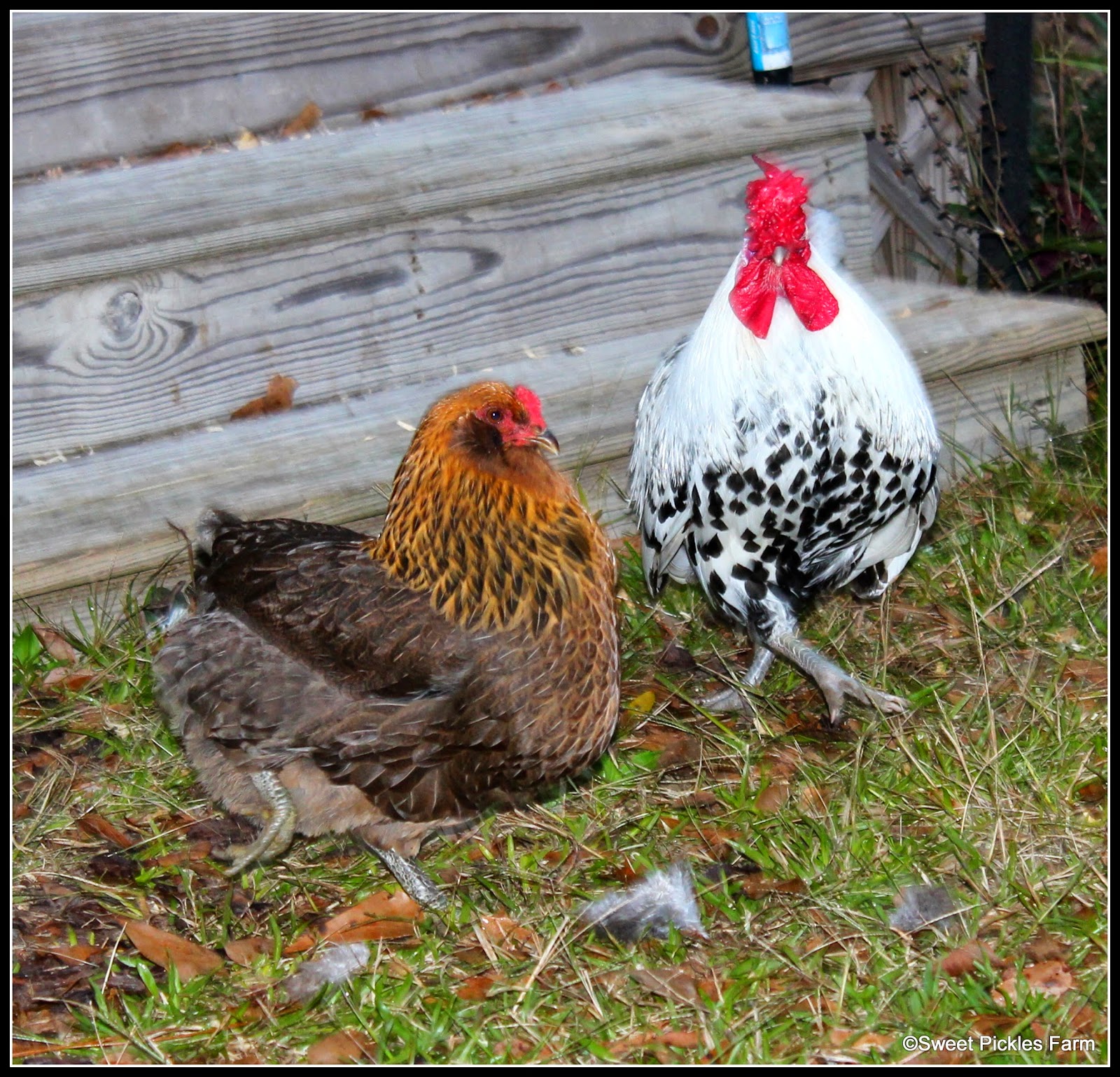 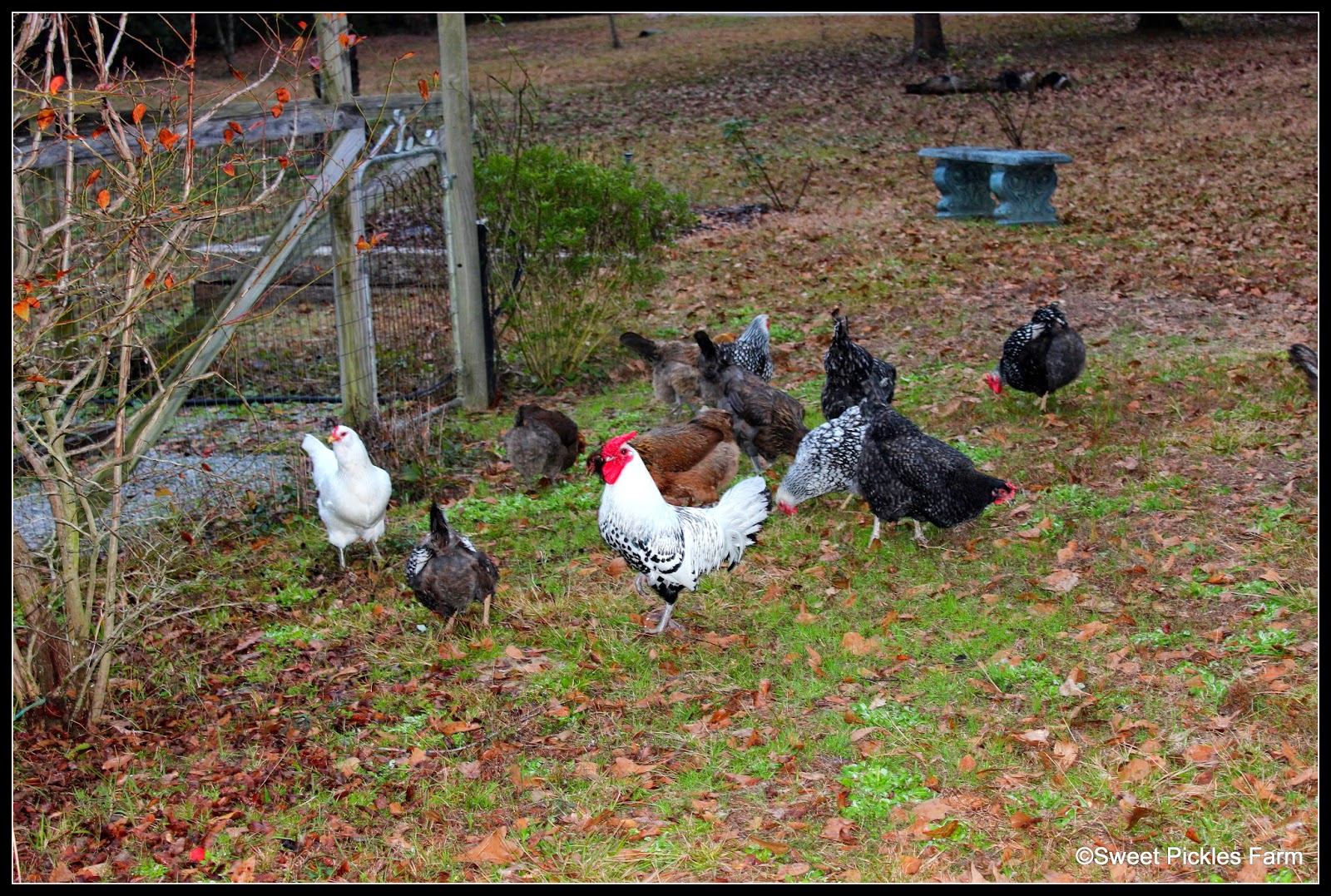 Pudge loved Mamie and Poppy, too.  That is what endeared him to them; he would treat them like they were his own.  Pudge would run up and greet them, and look around for a treat to offer Mamie or Poppy.  He was so gentle with his girls, unlike many of the roosters they had encountered before.  Not one of them got sore backs, or were afraid of him or screamed out when he offered a romantic gesture. 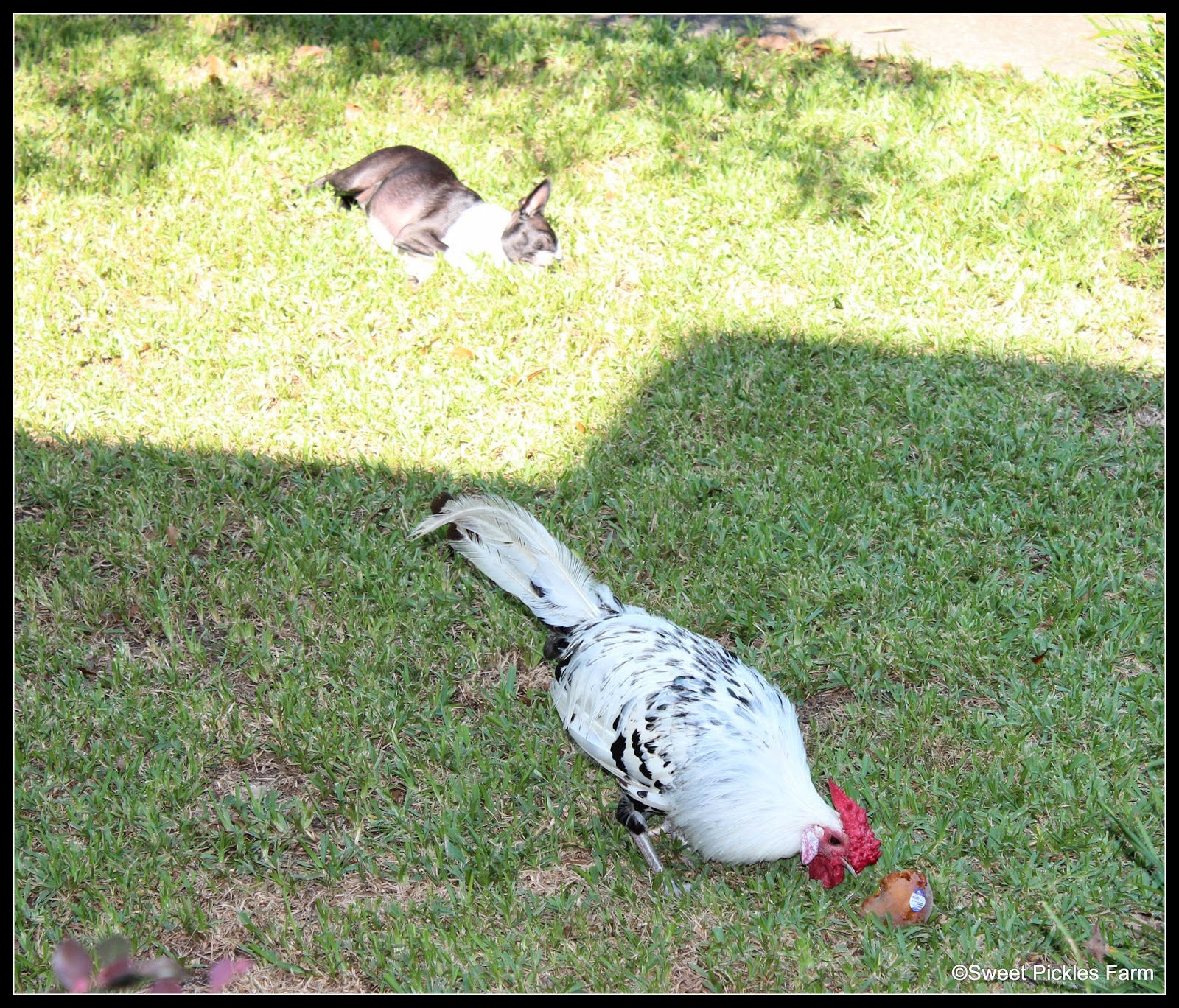 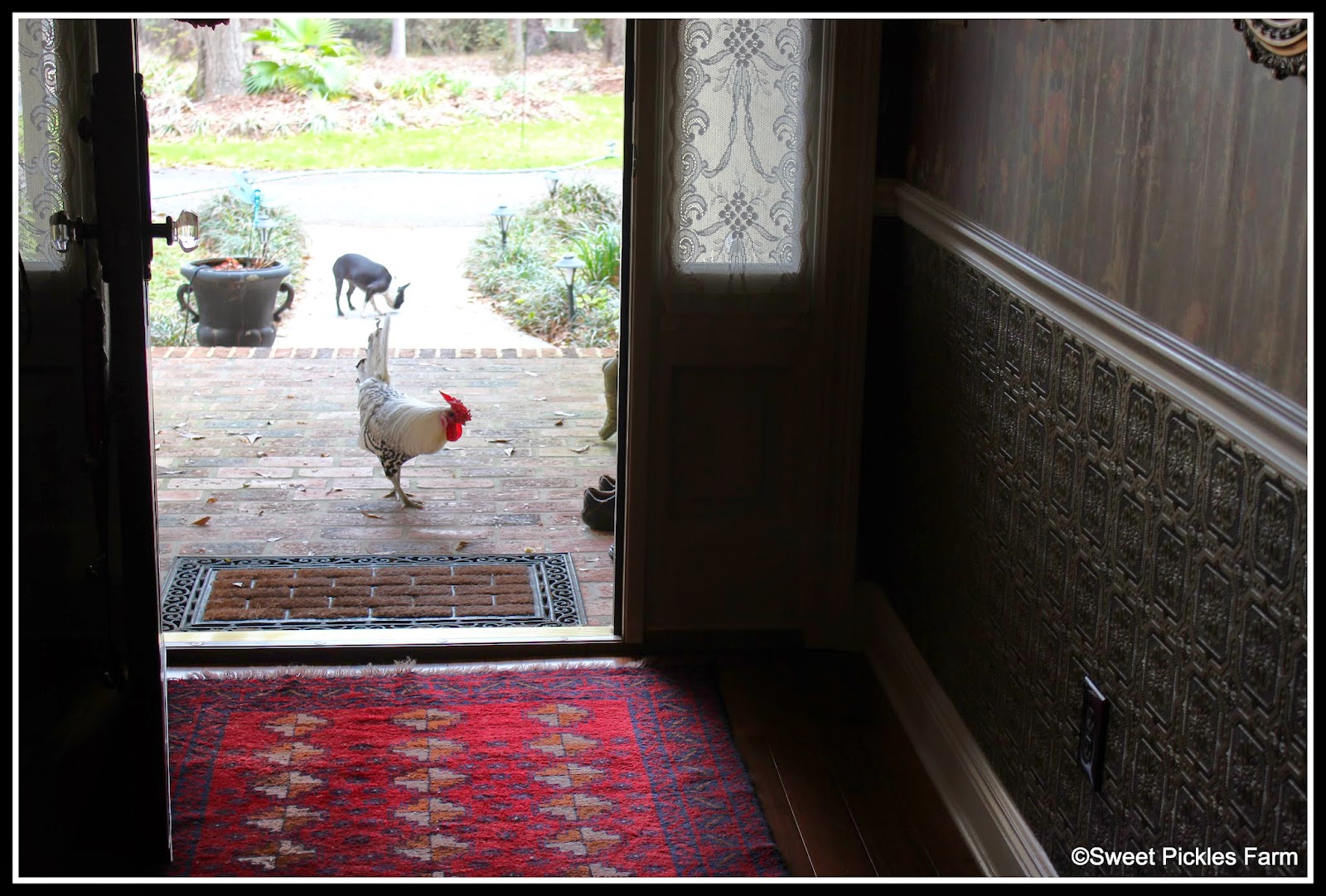 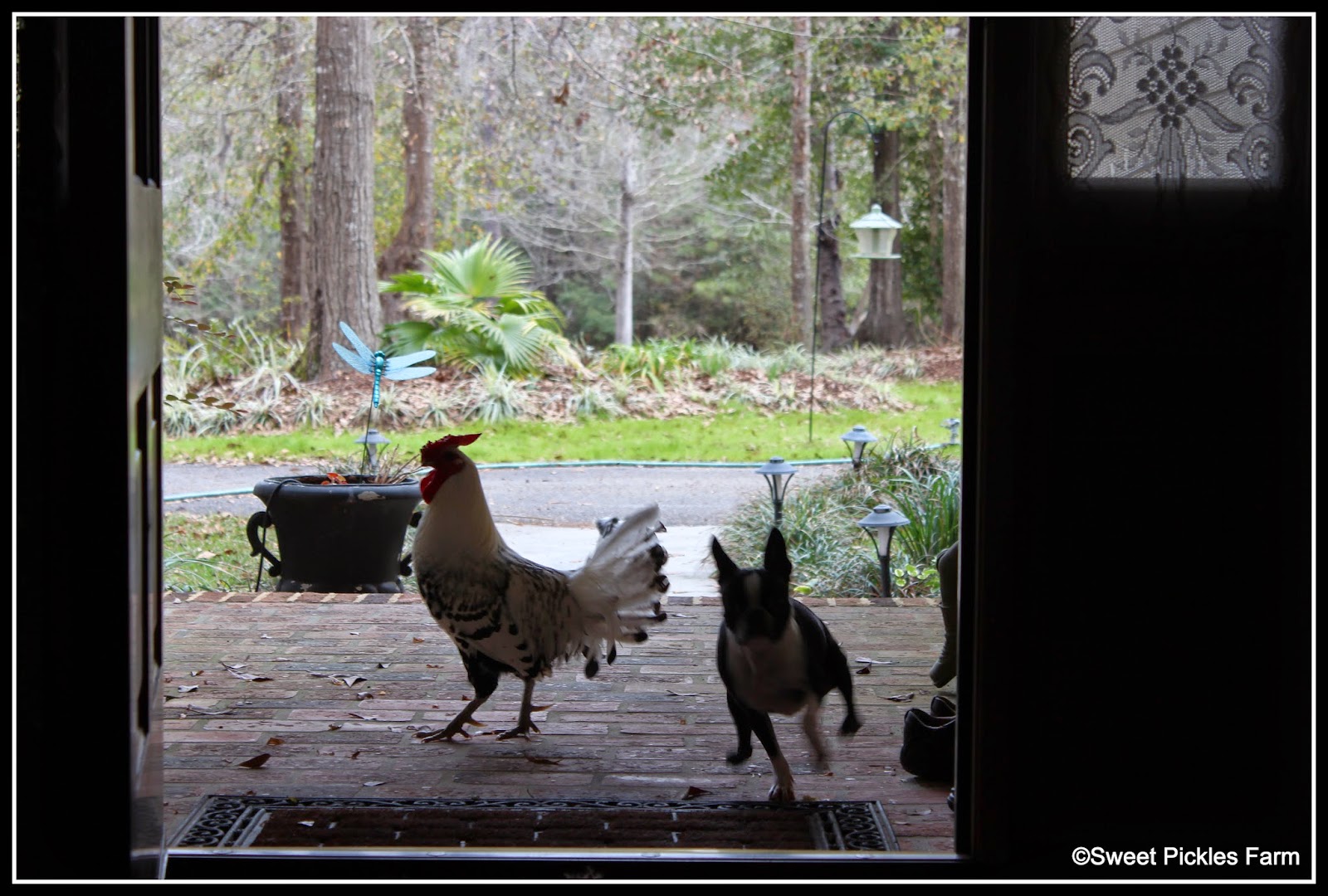 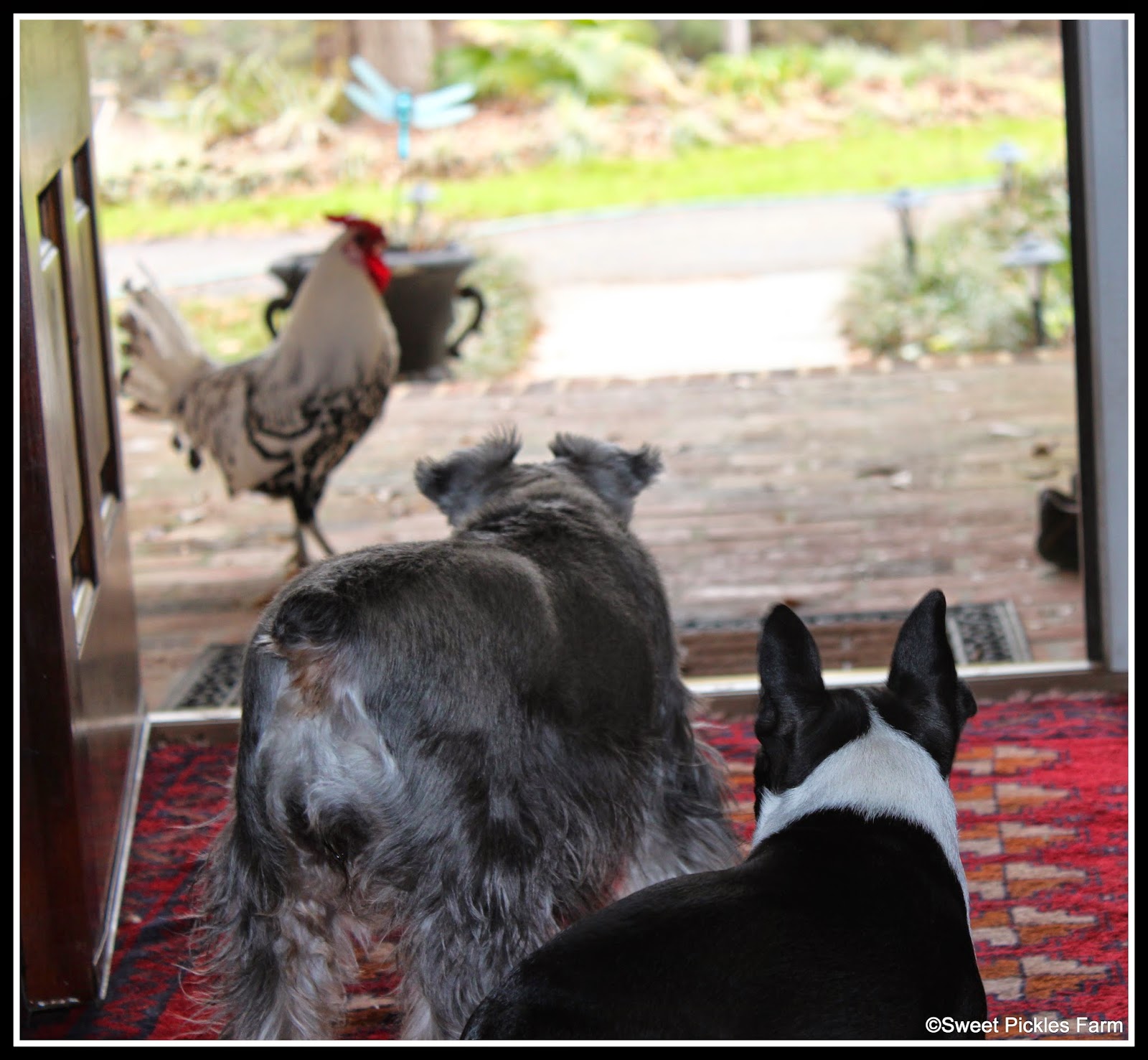 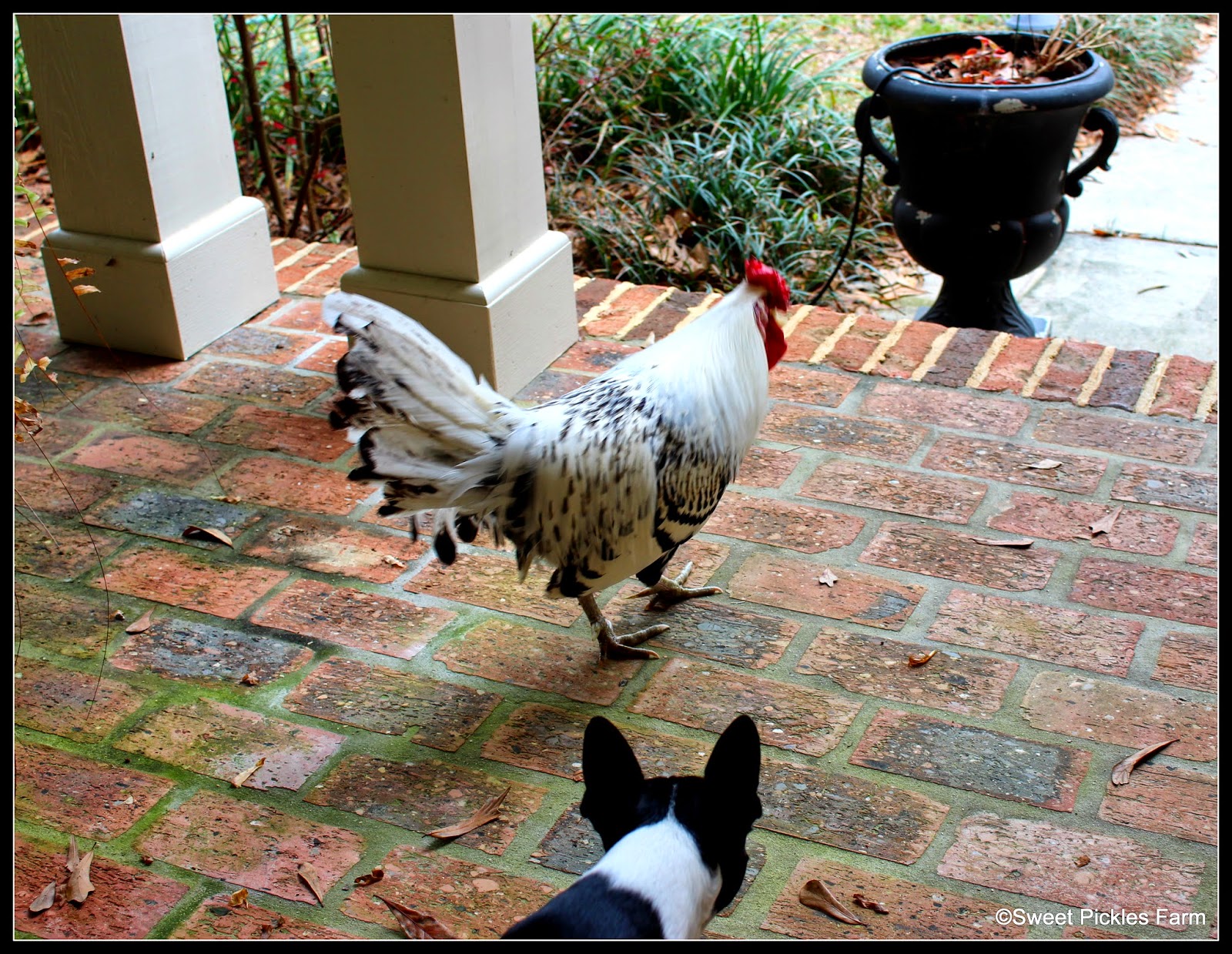 Sigh-but Pudge is no more...and so this little poem is an ode to our feathered friend of whom we will never forget.  Thank you, Pudge, for all that you did for our little farm, and for giving your life in the honor of your girls... 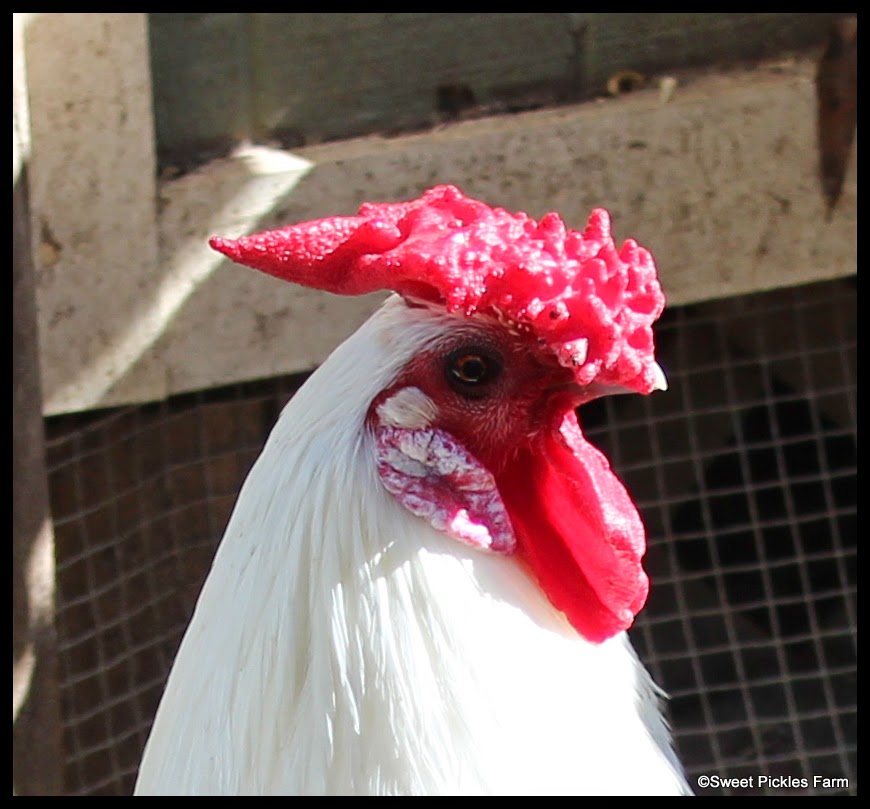 Email ThisBlogThis!Share to TwitterShare to FacebookShare to Pinterest
Labels: Chickens, Musing on Life